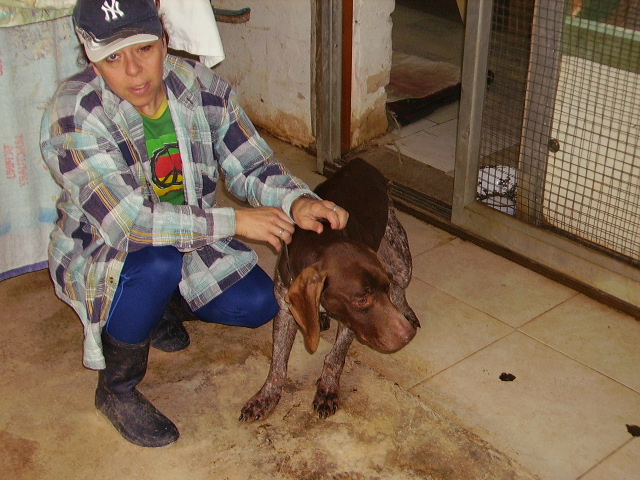 This handsome Kaccja dog was head yelping by a couple walking in the wilderness behind Popeye's Village. Fabio was called in and he retrieved him from a large hole in the cliffs. there was no difficult access and one wonders why he wasn't interested on coming out there on his own accord.

He had a very good appetite when he arrived at the sanctuary and already started putting on some weight! We have called him "Dug". Not that he had dug the hole of course!

"Lilly" on her way to the sanctuary

Lilly has been residing in the outdoors, in the vicinity of Selmun church for over five years now. Her "boy friend" Toni had been treated by us in October for a horrific chest wound which healed beautifully. Residents of the area who feed these dogs say that Lilly had regular litters and her puppies were either homed or "eliminated". We therefore decided to neuter Lilly. She is presently in the care of the sanctuary after having undergone her operation. She is recovering uneventfully. Sadly, Toni and their son Brian disappeared from the area last week (click here for full details). We are very preoccupied about their fate and have put up a campaign for information on other whereabouts. Our next decision is whether or not to return Lilly to her favorite haunts. One of her neighbours tried accepting her in her home but Lilly is an outdoor dog and wasn't very impressed by the domestic comforts. as much as the neighbours would like Lilly back they are very concerned about her disappearing like Toni and Brian.

Sandy on arrival with her saviour from Mosta

This lovely natured cocker spaniel was reported to be roaming around Mosta. The gentleman who brought her over was very kind and is going to donate a clipper to the sanctuary. It took about an hour to snip off the knotted and caked fur of this poor lady cocker with scissors. Her coat was such a mess.

SANDY HAS BEEN HOMED !!!